The Merchant Marine Act of 1920 (P.L. 66-261), also known as the Jones Act, is a United States federal statute that regulates maritime commerce in U.S. waters and between U.S. ports. Section 27 is part of the Jones Act that deals with cabotage (i.e., coastal shipping) and requires that all goods transported by water between U.S. ports be carried in U.S.-flag ships, constructed in the United States, owned by U.S. citizens, and crewed by U.S. citizens and U.S. permanent residents. The Act was introduced by Senator Wesley Jones.

In addition, amendments to the Jones Act, known as the Cargo Preference Act (P.L. 83-644), provide permanent legislation for the transportation of waterborne cargoes in U.S.-flag vessels. The Merchant Marine Act of 1920 has been revised a number of times, the most recent revision was the recodified version of 2006.[1]

The Jones Act is often confused with the Death on the High Seas Act, another United States maritime law that does not apply to coastal and in-land navigable waters.

Objectives and Purpose of the Merchant Marine Act of 1920

TITLE 46, APPENDIX App. > CHAPTER 24 > 861. Purpose and policy of United States[2] It is necessary for the national defense and for the proper growth of its foreign and domestic commerce that the United States shall have a merchant marine of the best equipped and most suitable types of vessels sufficient to carry the greater portion of its commerce and serve as a naval or military auxiliary in time of war or national emergency, ultimately to be owned and operated privately by citizens of the United States; and it is declared to be the policy of the United States to do whatever may be necessary to develop and encourage the maintenance of such a merchant marine, and, insofar as may not be inconsistent with the express provisions of this Act, the Secretary of Transportation shall, in the disposition of vessels and shipping property as hereinafter provided, in the making of rules and regulations, and in the administration of the shipping laws keep always in view this purpose and object as the primary end to be attained.

Cabotage is the transport of goods or passengers between two points in the same country by a vessel or an aircraft registered in another country. Originally a shipping term, cabotage now also covers aviation, railways, and road transport. Cabotage is “trade or navigation in coastal waters, or, the exclusive right of a country to operate the air traffic within its territory”. Cabotage is used in the context of “cabotage rights”, the right of a company from one country to trade in another country. In aviation terms, it is the right to operate within the domestic borders of another country. Most countries enact cabotage laws for reasons of economic protectionism, national security or public safety.The cabotage provisions relating to the “Jones Act” restrict the carriage of goods or passengers between United States ports to U.S.-built and flagged vessels. It has been codified as portions of 46 U.S.C.  Generally, the Jones Act prohibits any foreign built or foreign flagged vessel from engaging in coastwise trade within the United States. A number of other statutes affect coastwise trade and should be consulted along with the Jones Act. These include the Passenger Services Act, 46 USC section 289 which restricts coastwise transportation of passengers and 46 USC section 12108 restricts the use of foreign vessel to commercially catch or transport fish in U.S. waters.[3]These provisions also require at least three-fourths of the crewmembers to be U.S. citizens. Moreover, the steel of foreign repair work on the hull and superstructure of a U.S.-flagged vessel is limited to ten percent by weight. This part of the policy is required for national security to maintain a shipbuilding capacity for construction and repair of vessels within the United States.

It allows injured sailors to make claims and collect from their employers for the negligence of the ship owner, the captain, or fellow members of the crew.[4] It operates simply by extending similar legislation already in place that allowed for recoveries by railroad workers and providing that this legislation also applies to sailors. Its operative provision is found at 46 U.S.C. § 688(a), which provides:

“Any sailor who shall suffer personal injury in the course of his employment may, at his election, maintain an action for damages at law, with the right to trial by jury, and in such action all statutes of the United States modifying or extending the common-law right or remedy in cases of personal injury to railway employees shall apply…”

This allows seamen to bring actions against ship owners based on claims of unseaworthiness or negligence. These are rights not afforded by common international maritime law.

The United States Supreme Court, in the case of Chandris, Inc., v. Latsis, 515 U.S. 347, 115 S.Ct. 2172 (1995), has set a benchmark for determining the status of any employee as a “Jones Act” seaman. Any worker who spends less than 30 percent of his time in the service of a vessel on navigable waters is presumed not to be a seaman under the Jones Act. An action under the Act may be brought either in a U.S. federal court or in a state court. The seaman/plaintiff is entitled to a jury trial, a right which is not afforded in maritime law absent a statute authorizing it.

Critics note that the legislation results in costs for moving cargo between U.S. ports that are far higher than if such restrictions did not apply[citation needed]. In essence, they argue, the act is protectionism.

Critics also contend the Jones Act has caused the U.S. shipbuilding industry to build vessels in the U.S. which are more expensive than those built elsewhere. A 2001 U.S. Department of Commerce study indicates that U.S. shipyards build only one percent of the world’s large commercial ships. Few ships are ordered from U.S. shipyards except for cabotage. U.S. operators of ships in cabotage have an economic incentive to continue operating old vessels rather than replace them with relatively high cost vessels built in the U.S. The report concluded that the lack of United States competitiveness stemmed from foreign subsidies, unfair trade practices, and lack of U.S. productivity.[citation needed] However, the same argument buttresses that of their opponents who state that without the Jones Act, all remaining US shipyards would be deconstructed or outsourced overseas resulting in the utter destruction of the US Maritime industry. In turn, this would result in higher costs for US Navy vessels and eventually require most Naval ships meant for national defense to be built overseas as well.[5][dead link]

Moreover, critics point to the lack of a U.S.-flagged international shipping fleet. They claim that it is economically impossible for U.S.-flagged, -built, and -crewed ships to compete internationally with vessels built and registered in other nations with crews willing to work for wages that are a fraction of what their U.S. counterparts earn.[citation needed] However, the same argument is used by the Seamen Union which claims the Jones Act allows for a well paid, educated, and all American merchant mariner force.[citation needed]

Supporters of the Shipping Act maintain that the legislation is of strategic economic and wartime interest to the United States. The act, they say, protects the nation’s sealift capability and its ability to produce commercial ships. In addition, the act is seen as a vital factor in helping maintain a viable workforce of trained merchant mariners for commerce and national emergencies. During the Vietnam War, ships crewed by civilian seamen carried 95% of the supplies used by the American armed forces. Many of these ships sailed into combat zones under fire. The SS Mayaguez incident involved the capture of mariners from the American merchant ship SS Mayaguez.[6] Supporters say that it also protects seafarers from deplorable living and working conditions often found on foreign-flagged ships. Finally, they point to the key role played by the US Merchant Marine in supporting Global operations against terrorism and the Iraq and Afghanistan Campaigns. They claim that without these assets, the US would be under substantial foreign influence in conducting its policy in accordance with National Security.[5][dead link]

America needs a strong and vibrant U.S.-Flag Merchant Marine. That is why you can continue to count on me to support the Jones Act (which also includes the Passenger Vessel Services Act) and the continued exclusion of maritime services in international trade agreements. Barack Obama, August 28, 2008 [7][dead link]

I can assure you that a Reagan Administration will not support legislation that would jeopardize this long-standing policy … embodied in the Jones Act … or the jobs dependent on it. President Ronald Reagan, 1980 [8]

When it comes to backing the Jones Act, from my standpoint, it’s a no-brainer. We need a strong maritime industry, and part of a strong industry is highly trained merchant mariners, so many of whom are employed on Jones Act ships. We need a strong shipbuilding industry. We can’t let the generations that follow us forget what America was capable of when the call went out for Liberty and Victory ships during World War II. We need the current shipping capacity to move the lifeblood of this country where it needs to go, when it needs to go. The Jones Act supports all these things. It’s vital to our national security. Rear Admiral Mark Buzby, Commander, U.S. Military Sealift Command, 2012 [8]

The Jones Act has been supported by Presidents Obama, Clinton, Bush, Reagan, Carter, and Ford, and further all the way back to Woodrow Wilson who originally signed it into law in 1920. It is supported by American military leaders. Furthermore, there are other domestic interests which support the Act both from self-interest in keeping them cost competitive in some areas in contrast to the high-cost of sea traffic as well as more altruistic policies of keeping a diversified transportation system. In fact, all of these transportation interests intersect seafaring cargo at some point in the supply line. Consequently, retention of the Jones Act is also supported from the domestic airline, trucking, and rail industries. “Reduced to its essential terms, the Jones Act simply requires companies operating in the domestic commerce of the United States to comply with U.S. laws. This requirement includes corporate taxes, the National Labor Relations Act, the Fair Labor Standards Act, Coast Guard standards, employing American citizens, etc. American ships are subject to these laws and foreign ships are not. This same fundamental principle applies to every other company doing business in the United States, from agriculture to retail.” (Quote from R.J. Pfeiffer, maritime expert former CEO of Alexander Baldwin in commentary published in the Star Advertiser 12/26/1997)

Requests for waivers of certain provisions of the act are reviewed by the United States Maritime Administration on a case-by-case basis. Waivers have been granted in cases of national emergencies or in cases of strategic interest.[9]

In order to conduct an emergency shipment of gasoline from Dutch Harbor, Alaskato Nome in January 2012, Secretary of Homeland Security Janet Napolitanogranted a waiver to the Russian ice class marine tanker Renda. Renda was originally scheduled to onload gasoline in Northern Japan for shipment but was unable due to a gale.[12]

The Department of Homeland Security issued a blanket waiver of the Jones Act to all shipping for 12 days from November 2 to 13 2012, following widespread fuel shortages caused by Hurricane Sandy.[13][14]

The maps below show the geographic distribution of recent page visitors. Click any map for a larger view. 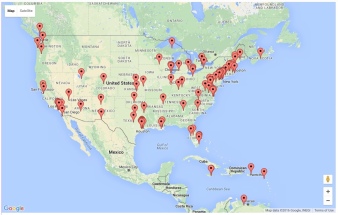