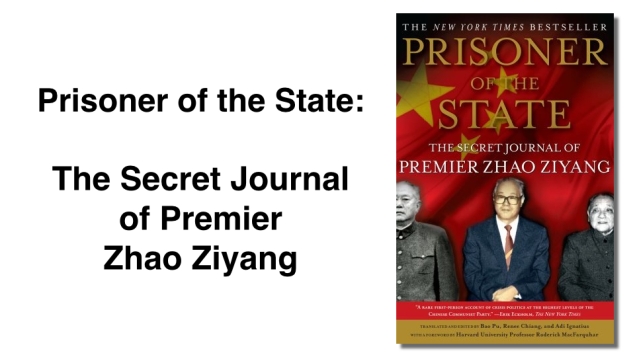 Prisoner of the State: The Secret Journal of Premier Zhao Ziyang is a historic novel based on dozens of audio recordings from Zhao Ziyang. [Amazon]

Following Zhao Ziyang’s public statement at the Tiananmen Square protest, Zhao was removed of all positions in government and placed under house arrest. For the next sixteen years of his life, Zhao lived in forced seclusion in a quiet Beijing alley.

Although minor details of his life leaked out, China scholars lamented that Zhao’s account of events was to remain unknown. Zhao’s production of the memoir, in complete secrecy, is the only surviving public record of the opinions and perspectives Zhao held later life in life.

Zhao began secretly recording his autobiography on children’s cassette tapes in 1999, and eventually completed approximately thirty tapes, each about six minutes in length. Zhao produced his audio journals by recording over inconspicuous low-quality tapes which were readily available in his home: children’s music and Peking Opera.

Zhao indicated the tapes’ intended order by faint pencil markings, and no titles or notes on how Zhao intended the tapes to be otherwise interpreted or presented were ever recovered. The voices of several of Zhao’s closest friends were heard in several of the later tapes, but were edited out of the published book in order to protect their identities.

After the tapes’ creation, Zhao smuggled them out of his residence by passing them to these friends. In order to minimize the risk that some tapes might be lost or confiscated, each participant was only entrusted with a small part of the total work.

Because he could only produce the tapes during periods in which his guards were absent, the process of recording the tapes took over a year. Bao Pu, one of the editors who worked on publishing Zhao’s memoir, first learned of the tapes’ existence only after Zhao’s death on January 17, 2005.

It took several years for Bao to collect them and gain legal permission from Zhao’s family to publish Zhao’s autobiography. Zhao’s family has always maintained that they were completely unaware of the tapes’ existence until contacted by Bao Pu. After Zhao’s death a second set of tapes (perhaps the originals) were found in Zhao’s home, and were returned to Zhao’s family.

The above text is an excerpt from Wikipedia. (source)