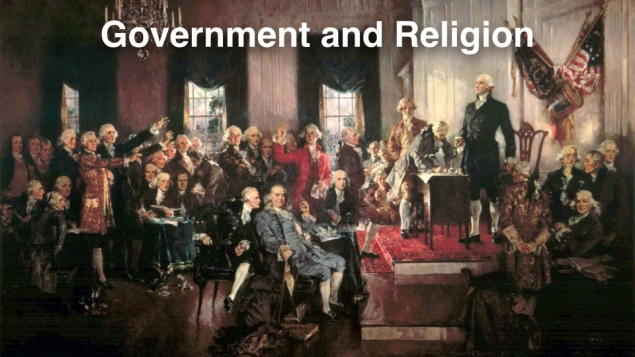 The government and stability of social structure in the United States are based on various foundational principles:

For a democracy to be effective, people must be able to read and make informed and logical decisions. Of course there are also economic benefits to having an educated nation. For these reasons, John Adams proclaimed:

“The whole people must take upon themselves the education of the whole people and be willing to bear the expenses of it. There should not be a district of one mile square, without a school in it, not founded by a charitable individual, but maintained at the public expense of the people themselves.” ~ John Adams, 10 September 1785 (source)[1]

Education alone is not enough to ensure that a nation can be self-govnerned. Virtues, values, and morality are required to ensure that a collective internal compass will guide people to positive, ethical, and beneficial decisions that produce optimal outcomes for all involved. The cornerstone statement on this subject was from John Adams:

“[in the absence of morality]  this country will be the most miserable habitation in the world. Because we have no government, armed with power, capable of contending with human passions, unbridled by morality and religion. Avarice, ambition, revenge and licentiousness would break the strongest cords of our Constitution, as a whale goes through a net. Our Constitution was made only for a moral and religious people. It is wholly inadequate to the government of any other.” ~ John Adams, 11 October 1798 (source)

The Role of Religion in Society and Government

There are many views regarding the role of religion in society and government. Some people, critical of all forms of religion, will point to internal corruption and religious wars as an example of how religions have a negative impact on society. Some countries see religion as a threat to national security and social stability. Those supportive of religion will point to the teachings on morality found in religion. Beyond intellectual teachings on morality, many religions profess that a “relationship with God” or “knowing Jesus” or “becoming one with Buddha” produce a transformational change internally to a person that results in an “encyclopedia of kindness” being written on their hearts. Like the small lump of dough used to create a new loaf of bread, the seeds of spiritual transformation can cause a person to grow into a more kind, gentle, loving, and giving individual – apart from sermons and religious texts. Some would suggest that any religion that produces positive outcomes is sufficient to promote an internal ethical compass in people. Others would argue that their own professed religion is “the only way” to salvation and social morality.

The following text is an excerpt from “Libations for Liberty” by pastor Brad Sherman of GetPurpose.org:

“…all power is vested in,and consequently derived from, the people; …magistrates are their trustees and servants, and at all times amenable to them.” ~ George Mason

Government being derived from the people, which translates to public servants, not Nobles, Lords and Kings, was revolutionary to politics. But what George Mason was describing was not pure democracy, a form of government that virtually all the founders considered evil. The founders understood that the Law of God which was first written on stone, had now been written upon the human heart. Therefore, government and its laws could now come from the people because God had made His dwelling place in them. This is why the American form of government was unique among the governments of the world.

Government of the people and by the people is an idea that grows directly from Christianity and Christianity alone. Only through the death of Jesus Christ, His resurrection, and His sending of the Holy Spirit to live in the hearts of men, could such a government be successful. It was true then and it is true now. Pray for a great awakening in our land.

This commentary speaks to the Christian conservative evangelical basis for the interdependence of faith and government in the United States.

Disclaimer. This website does not intend to promote or favor any particular religious dogma. It’s goal is to inform and educate about a variety of issues and inspire discussion.

Source Materials. Information below is provided about source materials used for the above writing.