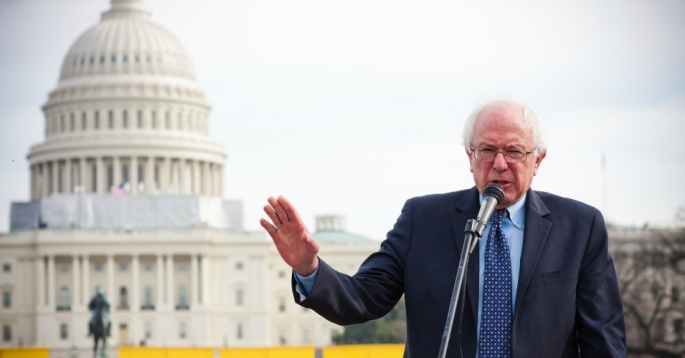 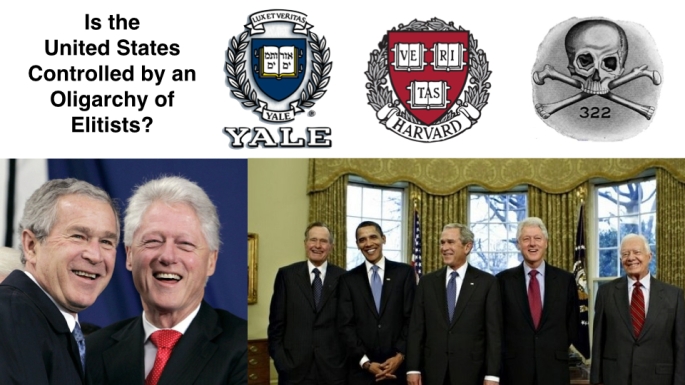 When one considers the political, economic, academic, and family lineage of those who have been running the country, it seems like the United States is an oligarchy of elitists.

An Oligarchy is defined as follows:

Oligarchy (from Greek ὀλιγαρχία (oligarkhía); from ὀλίγος (olígos), meaning “few”, and ἄρχω (arkho), meaning “to rule or to command”) is a form of power structure in which power effectively rests with a small number of people. These people could be distinguished by royalty, wealth, family ties, education, corporate, or military control. Such states are often controlled by a few prominent families who typically pass their influence from one generation to the next. But inheritance is not a necessary condition for the application of this term.

This most certainly defines how power and control is transferred from one generation to the next in the United States.

A Meritocracy No More

Some may question whether or not we ever were a meritocracy. With regard to the most powerful elite who run our country, An article from 2004 in The Economist about Meritocracy in America has the following statement about recent U.S. presidents:[1]

The most vivid evidence of social sclerosis comes from politics. A country where every child is supposed to be able to dream of becoming president is beginning to produce a self-perpetuating political elite. George Bush is the son of a president, the grandson of a senator, and the sprig of America’s business aristocracy. John Kerry, thanks to a rich wife, is the richest man in a Senate full of plutocrats.[2] He is also a Boston brahmin, educated at St Paul’s, a posh private school, and Yale—where, like the Bushes, he belonged to the ultra-select Skull and Bones society.

Mr Kerry’s predecessor as the Democrats’ presidential nominee, Al Gore, was the son of a senator. Mr Gore, too, was educated at a posh private school, St Albans, and then at Harvard. And Mr Kerry’s main challenger from the left of his party? Howard Brush Dean was the product of the same blue-blooded world of private schools and unchanging middle names as Mr Bush (one of Mr Bush’s grandmothers was even a bridesmaid to one of Mr Dean’s). Mr Dean grew up in the Hamptons and on New York’s Park Avenue.

The most remarkable feature of the continuing power of America’s elite—and its growing grip on the political system—is how little comment it arouses. Britain would be in high dudgeon if its party leaders all came from Eton and Harrow. Perhaps one reason why the rise of caste politics raises so little comment is that something similar is happening throughout American society. Everywhere you look in modern America—in the Hollywood Hills or the canyons of Wall Street, in the Nashville recording studios or the clapboard houses of Cambridge, Massachusetts—you see elites mastering the art of perpetuating themselves. America is increasingly looking like imperial Britain, with dynastic ties proliferating, social circles interlocking, mechanisms of social exclusion strengthening and a gap widening between the people who make the decisions and shape the culture and the vast majority of ordinary working stiffs.

However, centralized power and control is contrary to the goals of a democratic society.

An Oligarchy need not be dysfunctional and harmful if those in leadership serve the people. However, when an Oligarchy morphs into a Plutocracy, a society can begin to crumble.

“The term ‘plutocracy’ is generally used as a pejorative to describe or warn against an undesirable condition,. Throughout history, political thinkers such as Winston Churchill, 19th-century French sociologist and historian Alexis de Tocqueville, 19th-century Spanish monarchist Juan Donoso Cortés and today Noam Chomsky have condemned plutocrats for ignoring their social responsibilities, using their power to serve their own purposes and thereby increasing poverty and nurturing class conflict, corrupting societies with greed and hedonism.” – Wikipedia, Plutocracy

Perhaps one of the strongest cases for democratic governance is the potential danger that an elitist controlled government may become a plutocracy.